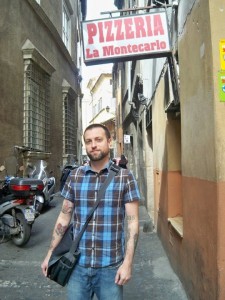 James Nichols’ Mom is awesome. James Nichols is pretty cool too. He goes on long walks, which he refers to as EpicWalks. He doesn’t really get Valentine’s Day Presents. One time we both read on a rooftop to some people, thanks to the lovely Loose Change Magazine. That was when I decided that James Nichols was a swell guy, and that he should probably read at a future Vouched Presents. Well, the future is next Monday, February 13th. Here are some things James Nichols and I discussed.

So the next Vouched reading is the day before Valentine’s day. Is Valentine’s day an important holiday for you? What’s the best Valentine you’ve ever received?

Valentine’s Day has never been a big day for me.  When I was younger, I didn’t care for Valentine’s Day because I couldn’t get any girls and was resentful.  When I was in my early and mid twenties, I didn’t care for Valentine’s Day because I never had any money to take a girl out on a nice date.  Nowadays, I’m married, so the sentiment behind the holiday is a bit moot for me. By that, I mean that I don’t find a need to have one day set aside to remind my lover of my love; shouldn’t I be doing that every day? Still, I think I’ll cook my wife a nice meal and consent to a cozy evening of romantic comedies…

The best Valentine’s Day gift I ever got was when I was about eight. My mom gave me a Nintendo game called Gradius.  It was rad.

Oh, she is. She’s kind of like a hippie who was never really a hippie. Y’know, she never led the life, wore tie dye or protested Vietnam or anything like that, but she’s a very cool, open-minded lady, so sweet and thoughtful. She’s big on English literature and the BBC and things like that. A big Anglophile. She’s tried to pass that on to me, but I have trouble getting into the whole Jane Austen/Brontë sisters tip.  I’m more of a Francophile myself. Still, I’m a big fan of hers. How could I not be her biggest fan, with her giving me awesome Nintendo games for Valentine’s Day?

Precisely my point! High five for your Mom. Here’s a question: As a Francophile, do you find you have more in common with Thomas Jefferson or Bill Maher (both noted Francophiles themselves)?

I’m gonna go with Thomas Jefferson. Not that I think I’m presidential material or anything, but I like his style:  Getting appointed as Colonial Ambassador to France (that job must have really sucked), maintaining a lavish wine cellar, telling the British what for, hangin’ at Monticello…it seems like a good way to be. Bill Maher I like as well, but he’s a little snarky.

Don’t forget Thomas Jefferson also edited his own version the Bible. Even Bill Maher isn’t that bold. So, why do you write?

I’d like to say there’s a grand plan behind why I write, or some vital agenda that I’m trying to put forth, but it’s simpler than that. Writing is my zen time.  It’s a way for me to process things without going insane. I’m not putting out page after page of gorgeous literature on a daily basis, but as long as I get a few lines down, or an observation, or my impression of the day, I feel good. Writing is equilibrium.

That sounds very therapeutic. Have you ever practiced yoga or Feng shui? Do you think Thomas Jefferson would have?

I’ve never done anything like that, mainly because I have the flexibility of a brick wall. But I’m not against it. Thomas Jefferson may or may not have have been into yoga (he seems like he’d be a bit too pragmatic), but I know Ben Franklin would have been all about it.

How would you back up that claim?

Read any of his correspondence or parts of his Poor Richard’s Almanac;  the man was into self-improvement and living well. Were he alive today, I know you’d see him in a spin class or something, sweating it out in lycra pants.

How often do you work out?

I don’t work out in the conventional sense. You’ll never catch me in the weight room or anything like that, or entering marathons. But I am a big walker. At least a couple times a week, I’ll go out on what I call EpicWalks, which is basically me walking around with no real destination in mind for five to ten miles, depending on how much time I have. I like to take Marta to some stop I’ve never been to, get off the train and just walk around in the neighborhood that station serves. It’s amazing some of the things you see like that, on the ground, that you’d never see from your car or even from a bike. Atlanta is such a car-fixated culture. It’s nice to be out on the street with no car or iPod, just letting the city soak into you. It’s good for the soul, and for the writing.

Have you ever encountered something bizarre whilst on an EpicWalk?

Boy, have I. Almost every time I step out on these walks, I see something that blows my mind in some way or another. Usually, it involves bums. Like this one time, I turned a corner in Taco Town and found myself in the midst of a straight-up hobo brawl. I’m not sure what had happened to provoke it, but there were two guys beating the tar out of two other guys, like a hobo Battle Royale. I had to run to the other side of the street to avoid being wrapped up. Another time, I was putzing around near Castleberry Hill and a homeless guy wearing sweatpants walked up to me and asked for the time. There’s nothing particularly strange about that, but – full disclosure – the guy had a massive tent pitched in those fudgies, if you know what I mean.

So many funny encounters…I watched a guy propose to his girlfriend outside of Hooters on Peachtree Street. It was romantic. I’ve had pit bulls sicked on me in Peoplestown…I was attacked by a squirrel in Grant Park…I shot craps with a guy with no legs outside Underground…I walked past the cast and crew of The Walking Dead while they were filming here. I thought it was a Tyler Perry movie until I saw walking corpses. That kinda killed me. I could go on, but then you’d have to title this interview “Crazy shit James Nichols stumbles across while walking around in Atlanta.”

Hypothetically, say you came across a few of the interesting people you mentioned between now and our reading on February 13th. What would you say to entice them to attend the reading? Also, these three people are all very different. One for instance, could be the aggressive squirrel in Grant Park. The second person may be the legless craps-shooting gentleman you mention. The third person may be Jon Bernthal.

To the squirrel, I say, “Look man, I’m not all that bad. Maybe you were having a tough day and decided to lash out. I get it. We all do it. But do yourself a favor and come to the Vouched reading. Soothing words, good people, ambiance, beer. And plenty of furry friends. If you still hate me after that, then perhaps I deserve to be attacked.”

To my legless buddy: “Hey brah, I know you’ve been dealt a bad hand in the game of legs, but if you come to the Vouched reading, I guarantee you that – at least for a couple hours – you will feel as if you are soaring on gilt-gold wings. I’ll drive.”

To Jon Bernthal, or rather, his character, Shane: “Shane!  I found a place safe from the walkers. It’s on the outskirts of town; it’s secure. It has a good perimeter, excellent lines of sight, and there are goats for milk and meat. Everyone can stay there comfortably, even Dale, even Laurie…wait, sorry to bring her up. Anyway, come on man. It’s our only chance…DAMN!  WALKERS!”